With the exception of one’s own two feet, the bike is the most climate-friendly form of transport far and wide. But where does Switzerland stand when it comes to cycling? We have some exciting facts about bicycles for you and reveal some useful tips for the perfect cycling adventure.

In Switzerland, around 3 million people ride a bike. The use of e-bikes has also increased sharply in recent years; today, around 300,000 of them are in use. By contrast, more than one-fifth of Swiss households do not own a car. In large cities, the figure is almost half. If you compare the CO2 emissions of airplanes or cars with those of bicycles, it quickly becomes clear that bicycles are by far the most environmentally friendly and healthiest form of transportation apart from your own two feet.

Why cycling is definitely beneficial for our environment

In the EU, cyclists alone avoid 15 million tons of CO2 emissions each year, equivalent to a value of 2.2 billion euros. According to estimates by the German Ministry of Transport, 7.5 million tons of CO2 could be saved per year if 30% of car trips of less than six kilometers were shifted to the bicycle (Source in German: swisscleantech). In addition, there would be a reduction in air and noise pollution and less sealing of land, leading to an increase in soil and water quality.

Currently in Switzerland, about 6% of the employed and 8% of the pupils or students ride a bicycle to their place of work or education. Studies show that cyclists benefit more from the time they have to spend on getting around by spending time in the fresh air or enjoying the landscape. 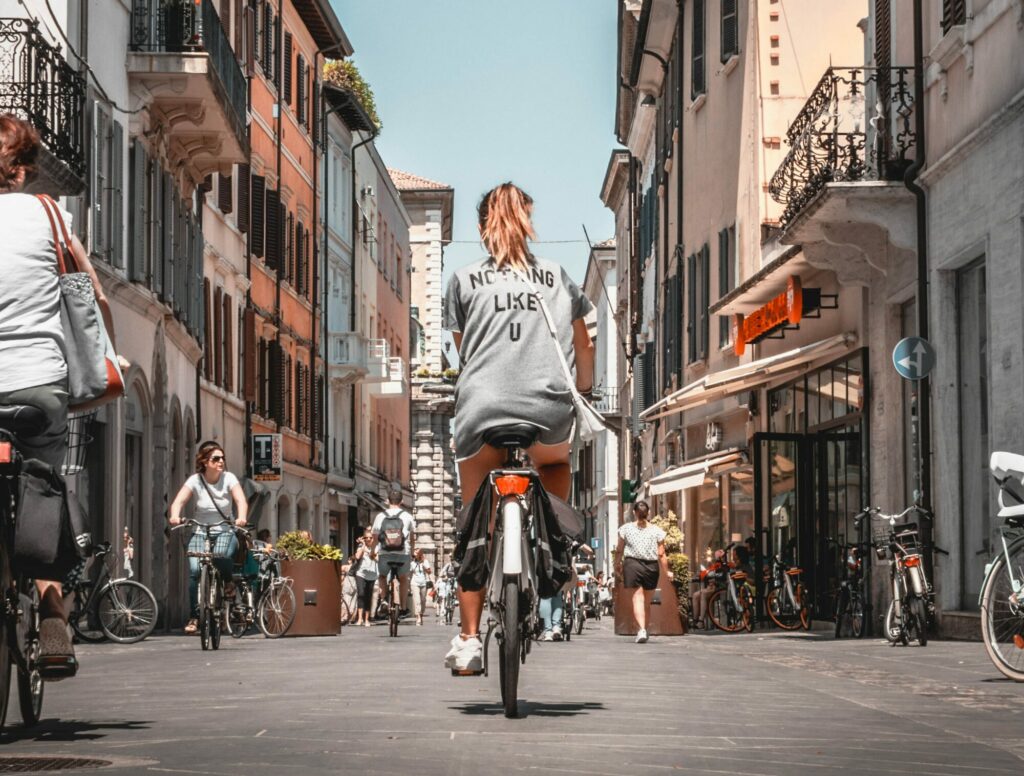 Mobility means being independent and flexible, among other things. With a bike, you can travel cost-effectively, flexibly and in a climate-friendly way. We have a few tips for you that you can easily implement in your everyday life.

Spread the bulk shopping over several small purchases during the week. This way, you can easily buy the quantities you really need by bike. To ensure that everything arrives safely at your home, there are various accessories in all variations that make shopping by bike easier: for example, baskets, saddlebags, trailers, or cargo bikes.

Climate tip: Leave the car at home when shopping and take the bike.

Four million Swiss commute to work every day. The majority of them by car – one explanation for the many traffic jams in Switzerland. Here, too, the bicycle is a very good economic and ecological alternative. There are now bike depots in many places, where the bike is protected against the weather and theft. Some locations even offer a cleaning or repair service. The concept of bikesharing also offers a flexible way to get around without having to worry about a parking space or bike maintenance. There are certainly some offers in your area. 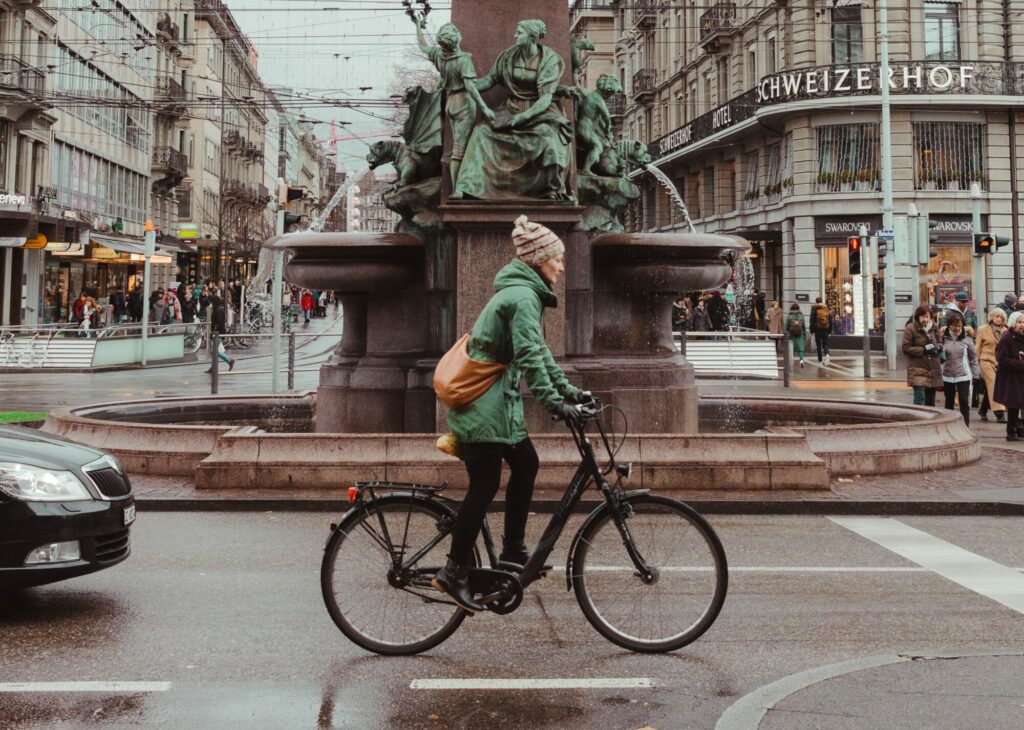 There are always bike fairs in almost all major cities in Switzerland where you can buy or sell a bike. If you want to give your old bike a second life, you can donate it to the organization “Velafrica“.

Each person travels an average of 19 kilometers per day for recreational activities. Leisure traffic consists mainly of motorized private transport (46% of the share of transport) and slow traffic (41.7%). The share of public transport is much lower (10.7%).

Climate Tip: Take a bike ride in your neighborhood and go on an adventure ride for something new.

Moving into a green future with the bicycle

There is still a lot of potential for the bicycle and it is waiting in the wings in all its colors and shapes. So saddle up now and do something good for our blue planet with simple and environmentally conscious choices. Have fun on your next bike ride! 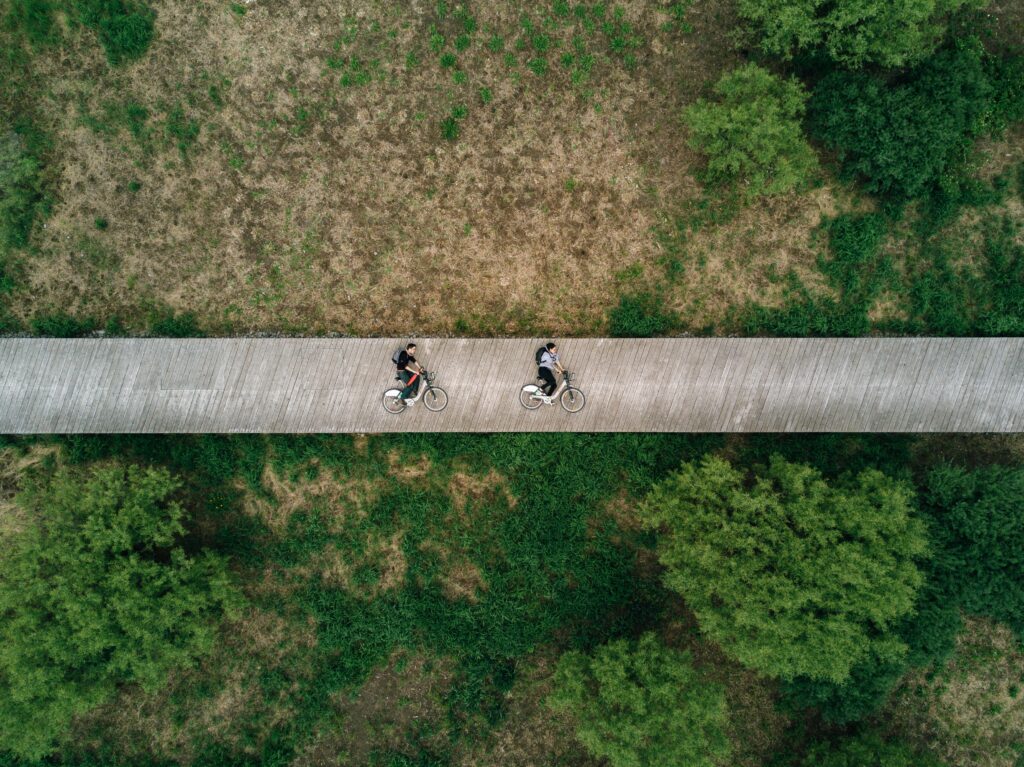 An article by Zoë Schmid.